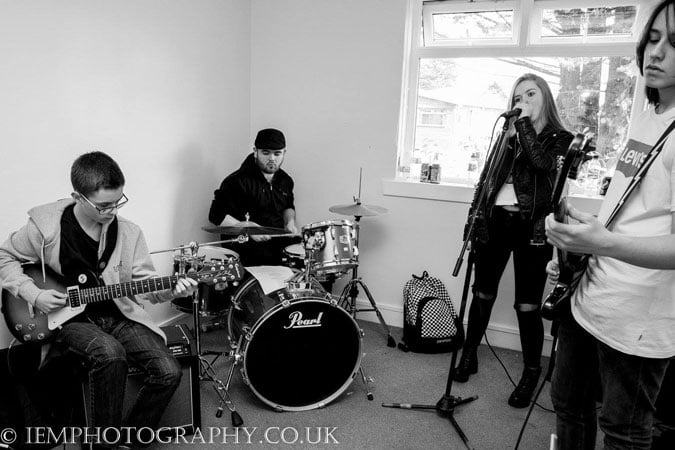 12-18 years old, can play a musical instrument or sing or both, want to practice and play in a band. Well to my surprise and slight embarrassment it turns out you can here at Geilsland.

I’ll admit to being in awe of folk who can play and or sing it’s one of those things that the best make look effortless.

So the beat goes something like this, Monday (10th April) the participants who don’t know each other are split up and the bands are formed. Each band (in this case 4) is given its own mentor who has been there done it so understands the process from beginning to end, as they are experienced gig musicians.

Tuesday through to Friday (April 11th-14th) are jamming sessions (rehearsals) for the bands and come Saturday night the curtain comes up, the music starts and its Show Time (April 15th). Each band performs for thirty minutes showcasing its songs learnt through the week, giving the bands a platform/stage to show what they can do with each bringing their own perspective to the wonderful and diverse world of music.

So it’s just about the music you say, well no its about life and musical skills coming together, for instance negotiation is required when selecting songs, compromise you might get your song but have to accept it being changed(reggie version).  Confidence in you and the bands ability to shine when required, adaptability as you might be a great solo singer or guitarist but working with others who share your passion requires a new philosophical melody a useful life skill in and out of a band.

Then of course comes the core part supporting each other, like a group of actors, being in a band is like a performance, sometimes things go wrong as my old Drama Teacher used to say the important thing is to stay in character and keep the audience with you.  If you stop or decide to have an argument then your performance will be remembered for all the wrong reasons. The band has to be untied even if only for thirty minutes

Okay the Jamming and the night was a success I don’t see any bands or soloists that have gone on to other gigs, well that’s where you are wrong.

Artists have gone on to bigger stages Lily Ferguson soloist and Guitar has played the Barrowlands twice and the Beith Beer Festival as well as other gigs. Our very own Gregor when he done Band factory although in a different band met Leona who although a drummer in another band formed the Minority report who in their own words are ‘Musically Rock, stylishly Punk’. And have amongst other locations across the UK performed at the Barrowlands twice and the Rebellion Festival in Blackpool as well as being mentioned in publications ranging from the Daily Record to Glasgow Eyes (The pictorial magazine and website dedicated to Glasgow life).

Come and see our showcase gig – Saturday 15th April, The Old Chapel, Geilsland, Beith. Lovely wee venue. Doors 7.00pm, first act on at 7.30pm. Entry by donation at the door. A selection of Scottish beers and ciders will be available from the bar along with soft drinks.

Band Factory’s a week long experience for young folk aged 12-18 who play an instrument, or sing. Bands are made up on the Monday morning, and rehearse Mon-Fri with the guidance of a mentor. Our mentors are all musicians who regularly gig themselves. A showcase gig is held on Sat evening for friends, family and members of the public.

We caught up with the band factory mentors, and had a little chat. We asked a couple of questions and this is what was said!

Who works with Pryde and is in the band Crash Club. He is mentoring young musicans attending band factory.

We asked him to name a song from the first album he owned?

Neal: 1st album… That’s a while ago now, ha. I think the 1st album i bought myself was offspring’s conspiracy of one & my favourite song was “want you bad”.

Name a song your embarassed to love?

Neal: I’m not ashamed of liking any songs to be honest. What most people would maybe say is a guilty pleasure for me would be phatt & small “turn around”. or the Bee gee’s “stay alive”.

Neal: OPM- Heaven is a halfpipe. Glasgow Qmu when i was 14.

Name the last song you listened to?

Neal: The music- The getaway.

What is the best part of your job?

Neal: The best part of my job is being able to see the personal development of the young people i work with. It’s crazy seeing some of them being 18 and out playing music.

Another musician and band factory mentor.

Name the last song you listened to?

Audrey: Last song i listened to was Twice by Catfish & the battlemen as thats what the group im working with were playing.

I hadn’t heard it before this week & i really like it!

Where is your favourite place to sprnd the day?

Audrey: Studio! I’d spend all day everyday in my studio if i could.

Name a song your embarrased to love?

Audrey: Wouldnt say im embarrased by any songs i listen to but i’ve got a major soft spot for Higer love by Steve Winwood. Some people would maybe call that a guilty pleasure.

What advice do you wish you could guve your 13-year-old self?

Audrey: Play & listen to music all the time and be nice to everyone.

Have you ever won a big prize or a competition?

Audrey: I was a finalist in a worldwide drum competition called hit like a girl which was pretty cool! Plus i won a go pro!

Mentor at band factory as well as a musician, playing in the band Tragic Ohara.

What other job would you like to be doing if not the one you do?

Who would you most like to live next door to?

Tosh: Anybody because no-one has stayed next door to me for the last year and all these weird strangers keep appearing. Maybe it’s because I play Slayer too loud.

Have you ever won a prize or a competition?

Tosh: I have a 5m swimming badge I’m quite proud of.

Which of your family members are you most similar to and how?

Tosh: My great granda buried a saxophone out his back door because it was annoying him, so I probably take after him.

Tosh: First concert I went to was Slipknot so “spit it out” was one of the songs they played.

Last but not least we spoke to…

Musician and mentor at band factory.

Name a song from the first album you owned?

Name a song your embarrassed to love?

Colin: I am not embarrassed of anything I like or love. Music is subjective and you can’t help what you like.

What is the best part of your job?

Colin: Being able to pass on a love for music and install positivity.

What other job would you like to be doing if not the one you do?

Colin: Actor- just another way I would seek attention.

Which of your family members are you most similar to and how?

Colin: My dog- we both love eating, sleeping and getting loads of attention.

Where is your favourite place to spend the day?