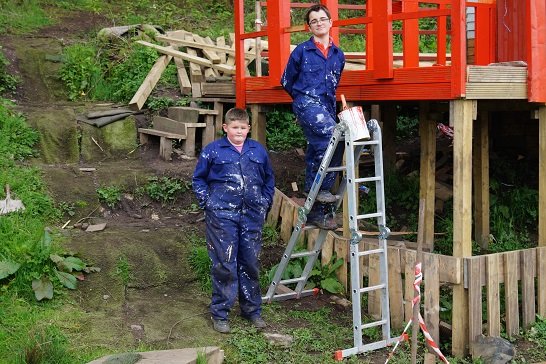 I had the privilege of interviewing with Sean and William about their first day here at Beith Community Development Trust, I prepared six question that they had to answer. When I asked them what they did on their first day they told me that they were doing painting and weeding and that they enjoyed it after that I asked them if they enjoyed working with their colleagues Sean answered that it was good and they were good people and when I asked William he jokingly said that It was good but it would be better without Ross. I also asked what they expected to do at work placement before they came and if they had done anything that they had expected – they both expected to be doing what they are doing painting and gardening after that I ask if they would work here again they both said yes and for my last question I asked them what they hoped to do on Thursday and Friday William said he would like to build something and Sean said he would like to do something other than painting. The structure they are building is a hut on posts and it looks like it coming along nicely. It has upper and lower levels and looks very professional so far, it should be a great addition to the many structures that are already built here and will look great when it’s done. Sean and William are great new arrivals to Beith Astro’s ultimate construction team.