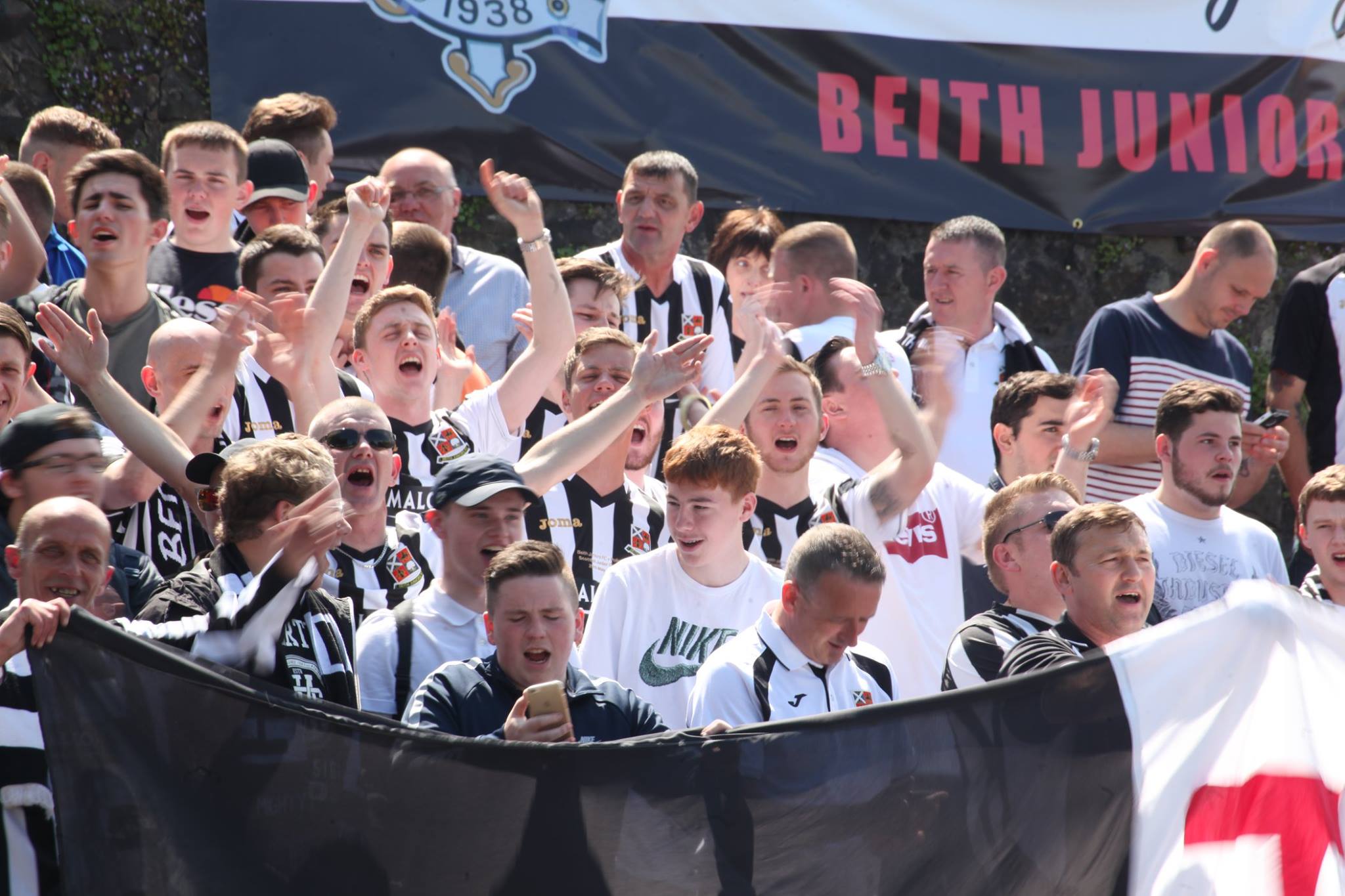 So it happened, first Scottish junior cup final, first Junior Cup, in the 78 year history of Beith Juniors  it would be hard to find a better occasion.

Throughout the ninety minutes then straight onto penalties there were  cheers, jeers, tears at point’s relief, then an explosion of emotion, with more than a few hugs, clapping, whooping, more tears and shock on people’s faces that  Beith had won the ETHenergy Junior Scottish Cup.

Pollock started the stronger dominating possession, finding passes and looked like the favorites the bookies had made them. Winning every ball for the majority of the first half. Only a lack of clinical finishing, brave defending and goalkeeping from Beith Goalkeeper Stephen Grindlay prevented them from scoring and spared Beith blushes.

On the 18th minute Beith lost Tommy Martin through injury being replaced by Jamie Wilson. A change of personal, tactics going from 4-4-2 to 3-5-2 and Beith becoming more confident finding passes and danger men. Meant that by the end of the first half Beith  were not only more settled  but had the best chance with Kenny Mclean’s volley heading net bound until Pollock Keeper  John Longmuir tipped over his own bar.

Although Pollock started the second half as they had the first, Beith were more comfortable, breaking with pace, guile and numbers, finding passes and creating opportunities. On the 59th minute Darren Christie hit a low left foot shot passed Longmuir which went into the far corner.

The east stand with the Beith fans went crazy, I’m sure it rocked for the next 3-4 minutes, if Rugby Park had a roof the ovation would have taken it off. This was replaced by a nervousness as it suddenly became a reality that Beith could win the cup.

While the Beith fans some still shouting others, sitting biting their nails wished the time would disappear, the Pollock fans seemed stunned, with a near silence at the main stand they had.

Pollock reacted by bringing on Robbie Winters and Liam Rowan, and after a David Winters shot was tipped onto the post by Grindlay and a scramble, Robbie was there score to equalise.

From then until the final whistle 15 minutes later both teams had chances to win the game with a David McGowan header for Beith and Robbie Winters shot for Pollock both coming the closest for their teams.

So straight to penalties we went no extra time, penalties which can be a cruel, Mclean missed the first for Beith; Pollock took a 2-0 lead which disappeared thanks to saves by Grindlay and Beith scoring the others. Richie Burke stepped up and well the rest is history.

Sure at times Beith rode their luck but when the whistle blew it didn’t matter Beith’s dream had become a reality. The players, coaches, fans had stood up, been counted and are now forever part of local folklore