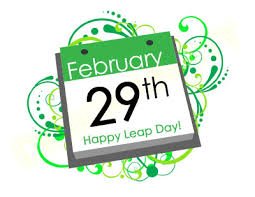 Today is the day we get a bonus day! It’s the day we need to keep the calendar aligned with the Earths’ revolutions around the sun! Julius Caesar introduced the Leap year around 45 BCE (before the Common Era) by adding one day onto the end of February. If he had not done this we would lose almost six hours from our calendar every year, meaning the calendar would be out by 24 days after only 100 years without leap days!

In most places Leaplings have to wait until March 1st to be eligible for any age specific privileges (ages 16, 18 and 21.) They are considered to be good-natured, friendly and optimistic.

February 29th also commemorates Sadie Hawkins Day on which women can propose to men. Tradition shows that a man was expected to pay a penalty if he were to refuse a marriage proposal from a woman on Leap Day. In many European countries, especially in the upper classes of society, tradition dictates that a man who refuses a proposal on February 29th has to buy her 12 pairs of gloves.

Remember Julius Caesar created the 29th February as a bonus day so take that extra leap, after all it only happens every four years!