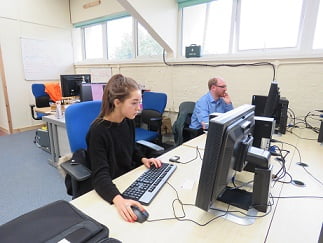 Today I started my work experience placement with Beith Community Development Trust, I am absolutely loving it so far and have only been here for one day! I’m given so many fun tasks to complete such as scheduling, sending group texts, photographing the campus and uploading photos to social media accounts. The working environment is so funny and friendly that work doesn’t seem like “work” at all. Already I’ve learned so many skills on the computer and other devices I’m using and I hope to learn more over the following week. I’m exited to photograph the groups and comply articles about them for social media as it’s right up my street. Furthermore, I have learned about the amazing things that are happening here and just how much it is shaping or community to be a better place, it’s a pleasure to be a part of something so big.

How many of us when we were younger dreamed of being a rock star or being in a band? Well on Friday 15th this dream got a little closer for 20 young people from our community.

Louis, Robbie, Rachel, Rahael, Abigail, Antonia, Morven, Gregor, John, Lily, Sarah, Emily, Paul, Craig, Calum, Erin, Eilidh, Jay, Rebecca and Euan from across Garnock Valley put on a brilliant gig at the Function Suite in the Eglinton, Beith. After only a week of rehearsals with performances by 4 bands, and 4 solo singers the guys were real professionals; impressing the audience and making the most of their sudden rise to musical stardom.

So how did it all come about? Well it all started when these two creative groups decided to work together and make music:

Unlicensed Events is a community project, part of Beith Community Development Trust, based in Beith, North Ayrshire. They are devoted to stimulating imagination and creativity in the community.

Model X Media is a Community Interest Company that delivers Creative Projects to those who want and uses the profits to provide for those who need them.

With Unlicensed Events spearheading the Band Factory project Model X Media provided the talented Tosh, Graham and Neal, three skilled musicians to mentor and work with our musical prodigies over the course of 5 days.

‘What a night! Band Factory gig was amazing – well done to all our performers, absolutely superb! The week flew by and all you young people should be really proud with what you achieved this week.’

Over the course of the week it was great to see that all of our musicians grew both in confidence and skill. They qualified for the opportunity by having a ‘skill or talent’ either being able to play (whatever level) a musical instrument or the ability (again whatever level) to sing.

‘Band Factory was fantastic, it was amazing to watch the progress the participents made in just 5 days, getting together for the first time on Monday and being ready to perform on Saturday night.  During Band Factory, one of our new bands wrote a song, composed the music for it, and played it at the gig – incredible!   At the gig, each and every one of the performers was brilliant, and the crowd loved it.  What a lot of young talent in the Garnock Valley!  It wasn’t just about the music though, some of the kids were quite shy to begin with but as the week went on their confidence grew, and friendships were formed.  They really supported each other throughout the week and at the gig, real teamwork. Superb! ’

More videos from the gig can be found on our YouTube page and the Unlicensed Events Facebook page.

If this sounds like something you or someone you know would have loved to be part of – never fear:

‘It was the first Band Factory, but definitely not the last’

Great news is that we’ve spoken to Model X Media, and have booked them for another Band Factory which will be week beginning Monday 6th April 2015, and will run Mon-Fri with a gig on Saturday 11th April 2015. Cost will be £10 for the full week. Venues to be confirmed. Places can be reserved now, and will be confirmed when booking form and £10 fee is received. Please contact gill.ritchie@beithtrust.org to book a space.

Don’t miss out on your chance at musical stardom!